The King of Greenwich Street

Welcome to the King of Greenwich Street! 5 Bedroom 4.5 Bath newly redone home in the heart of Cow Hollow. Sexy, open floor plan, amazing location! Lovely extended family home - perfect for family with children and plenty of room for both in-laws to have their own guest suites on separate floors for privacy. Searching for a home with Cow Hollow charm (coffered ceilings, wrought-iron railings, French doors), but without any of the old-house problems? You’ve found the one!

This home was substantially remodeled from the ground up just four years ago (brand  new foundation, all steel-beam construction with reinforced concrete with 2 by 12 beams and 2 by 6 studs at the bottom of the house, new sewer water/gas lines, 200-amp panel). This house has a wonderful floor plan for people that love living together but crave their private space – by having bedrooms on separate levels it creates that independence that so many couples/families crave – plus there are 3 bedrooms on one level with 2 full baths to make this a perfect family home. It also has two outdoor spaces for fresh air. Step inside and this home offers a great layout with room for everyone in the family to spread out!

There is a master suite on each of the three floors, and every room has been completed using very high end materials and fixtures - this builder/designer thought of everything! At the lower level, there’s a 2-car garage, laundry, a massive built-in storage area as well the first master suite. Head upstairs to the main living area that’s flooded with natural light. Your chef’s kitchen has tons of cabinet space and features top-of-the-line professional-grade VIKING appliances. (6- burner stove with grill, double ovens, refrigerator, wine cooler).The kitchen overlooks the open dining/living/family room area, which has French doors that open onto an amazing patio - south facing so you always get great light! Also, the kitchen has a beautiful island for your guests to sip cocktails or your children to do their homework while watching you cook up your wonderful creations. There is one bedroom, walk-in closet, en-suite bathroom on this second level as well as a half bath.

This top third level offers even more living space and possibilities! The third level has a special master suite with a stunning en-suite bathroom with custom tile work. The bedroom also opens up to a delightful large private deck with French doors. Two more bedrooms and  one full bath with bathtub complete this top floor to have three bedrooms and two full bath with family room on one level - perfect for families with small children or a happy couple who may need two home offices! It has a beautifully designed bar/mini kitchen with pull out fridge and freezer and covered doors so it looks like an attractive cabinet when closed. A large gas fireplace anchored by two stunning bay windows complete the family/ living area.

This home is as efficient as it is beautiful! Travertine marble floors throughout the house, electrical sockets are child proof, new double-pane windows, LED Halo energy-efficient lighting throughout and two Instahot hot water heaters. High-end BONUSES include a Sonos sound system, a whole-house security system(cameras on back & front of house) and a camera-enabled “Ring” doorbell. Your home is a sweet quiet hideaway in the heart of one of the most wonderful and vibrant neighborhoods in San Francisco's Cow Hollow. Keep the cars in the garage because you can walk (nice & flat here!) everywhere - the Marina, vibrant Chestnut Street and fabulous Union Street.

All original reports/permits are at property and available as part of the disclosure package as well as a very thick binder located in the home that has pictures of all work done with receipts spent on redoing this very sturdy home.

Walkscore 1855 Greenwich Street has a Walk Score of 97 out of 100. This location is a Walker’s Paradise so daily errands do not require a car. It also has a great Transit Score which means public transport is easily available. Flat as a pancake with many bike lanes makes this location very bikeable. Come tour this showstopper today!

ALL SHOWINGS BY APPOINTMENT ONLY AND WITH SIGNED PEAD FORMS.

Named for the pastureland it once was, Cow Hollow is now defined by its young and well-heeled denizens. The neighborhood is known for its nightlife—including noteworthy bars, restaurants, and nightclubs—and, by day, for its shopping and personal services. Those looking to put down roots here will be well situated between the Marina to the north and Pacific Heights to the south, living in a community both dynamic and classically San Francisco. Running east to west, Union Street is Cow Hollow’s center of commerce, with Fillmore Street providing a second, north-south axis. On these thoroughfares you’ll find fine boutiques and restaurants of all sorts, including many of the city’s favorite brunch spots. If anything captures the neighborhood’s essence, it might be the numerous retailers of high-end athletic fashion, which collectively reflect its residents’ active lifestyles. Beyond the green spaces within its limits, including Allyne Park and a public playground, Cow Hollow also shares a border with Presidio National Park. Its miles of trails and winding roads offer numerous routes for hiking, running, and cycling, leading all the way to picturesque Baker Beach, the Golden Gate Bridge, and the expansive coastal parkland of Crissy Field.

Cow Hollow is home to a variety of architectural styles, from mission to modern, with stately Victorians also in abundance. Its landmark buildings tend towards the quirky, attesting to San Francisco’s enduring irreverence. Built in 1861, the McElroy Octagon House, one of several late-nineteenth-century constructions with this unusual floorplan, has been fully restored and opened to the public. A bright blue Edwardian structure crowned with red onion domes, the Vedanta Society Old Temple, a Hindu religious center, anchors the corner of Filbert and Webster Streets, just off of Fillmore. Equally fanciful is the St. Vincent de Paul Church, also known as Exposition Church, with gambrel rooflines and a multi-story tower that draw from the architecture of both Renaissance Florence and Swiss chalets. Of Cow Hollow’s cultural landmarks, its foremost is perhaps a world-renowned restaurant. The creation of Chef Dominique Crenn, the first woman in the United States to receive multiple Michelin stars, Atelier Crenn boasts a rare three-star rating in the venerable Guide. Vibrant, trend setting, and assured in its status, it serves as an apt representation of Cow Hollow’s unique charisma. 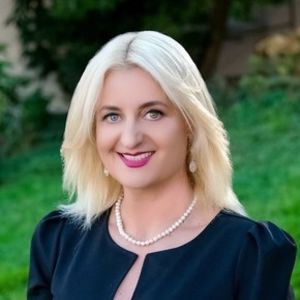